On February 20, 2014, the White House introduced a new series of measures intended to help curtail lawsuits filed by “patent trolls”.  A patent troll, also referred to as a non-practicing entity (NPE), is defined as a person or company that enforces patent rights against accused infringers in an attempt to collect licensing fees, but the entity does not manufacture products or supply services based upon the patents in question.    One of the most interesting and potentially useful aspects of these new measures is the Patent Litigation Online Toolkit available on the United States Patent and Trademark Office website www.uspto.gov.

In June 2013, President Obama announced an initiative to provide improved incentives for future innovation in the fields that generate high tech patents.  As part of this announcement, President Obama stated

“Patent trolls are increasingly targeting Main Street retailers, consumers and other end-users of products containing patented technology — for instance, for using point-of-sale software or a particular business method. End-users should not be subject to lawsuits for simply using a product as intended, and need an easier way to know their rights before entering into costly litigation or settlement.  The PTO will publish new education and outreach materials, including an accessible, plain-English web site offering answers to common questions by those facing demands from a possible troll.”

Over the past decade, patent owners have become increasingly aggressive in enforcing their patent rights as part of a money making business model.  Many patent owners have embraced the predatory tactic of sending demand letters to a large number of companies to inform these companies about alleged patent infringement.  These demand letters typically include both an allegation of infringement and an offer for a payment of a license fee to avoid threatened litigation.  The demand letters are sent with an assumption that the threatened party will pay the license fee to avoid the cost of potential patent litigation.

Threatened companies were left with few options to fight against the patent troll or to assess the validity of the threat made in the demand letter.  Until now. 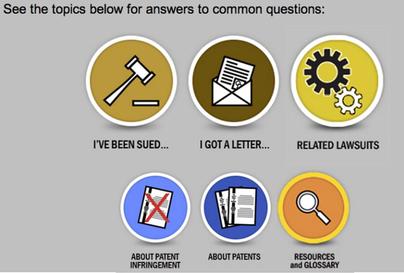 The screenshot above shows the Toolkit interface that is now accessible on the United States Patent and Trademark (USPTO) website.  While the toolkit provides links to general information about patents and patent infringement, the icon “I GOT A LETTER…” provides a links to several third-party websites that allow a threatened company to search to see if others have received the same demand letter and to determine if others have been sued by the same patent owner or on the same patent.

One of the third-party websites linked to from the USPTO website is run by the legal analytics company Lex Machina.  The data analytics platform behind the demand letter webpage was developed by the computer science department and law school of Stanford University and is offered free of charge to parities threatened with a patent lawsuit.

The information about the company that sent the demand letter includes how many demand letters the company has sent and have been reported, how many patent cases it has filed and, of these filings, how many of these cases have gone to trial.  The report also indicates the ten most recently filed cases, which includes information about the defendant in the cases and where these cases were filed.

The patent section of the report provides information about how many times the patent was asserted, how many open cases include the patent and whether or not the patent has been found invalid or unenforceable.

In addition to the link to the Lex Machina website, the USPTO “Resource and Glossary” page provides links to other third-party websites that provide information related to the patents asserted and related letters from the patent holder.

The USPTO Toolkit provides a single, convenient location for a company to compile a good amount of initial information after receiving the demand letter and before contacting their own legal representation.

Although the USPTO Toolkit will not, by itself, stem the tide of demand letters and patent infringement lawsuits filed by non-practicing patent entities (NPEs), the toolkit provides threatened parties with a new weapon in their arsenal to combat NPEs.